There’s one thing that has always distanced me from a large proportion of gay men: I’ve never really suffered from any notable form of homophobia.

There have been countless times where I’ve been talking to another gay chap and it’s become clear to me that there’s almost a part of my story missing: I know friends who suffered when they came out to their families, or faced prejudice at work, but whenever these topics are raised, I have very little from my side to give.

I was ‘lucky’ enough to be born into a family that had no problem with homosexuality, and I was aware of that fact from a young age. Other members of my extended family were gay and proud and, indeed, my mother’s best friend from school – who essentially played the role of an Auntie, given both my parents are only children – was a lesbian. I knew about all this even before I properly understood what a lesbian was.

I told my family I was gay at 16, but – life being as it is – I’ve obviously had to come out a fair few times since, whether at work (the Tesco I worked in 15 years ago probably had a higher rate of homosexuals than G.A.Y on a Saturday night) or at University. In all cases, I’ve never actually had a bad reaction. Even when I was bullied back at school, it wasn’t because anyone thought I might be gay, but rather because I was overweight and massively shy.

I also now live in the centre of Manchester – one of the most open and liberal spaces on the planet, I’d say – and I’ve spent the last few years travelling to other cities across the world that share this city’s penchant not only for tolerance but also acceptance, whether London and Amsterdam in Europe or San Francisco and Seattle in the US. On my work bag sits a rainbow badge that, wisely or not, I’ve never felt moved to remove in the couple of years it’s been sitting there.

Homophobia is something I rarely run into, and that’s undoubtedly a good thing. It would be very easy of me to assume that the whole topic was done and dusted.

Of course, for many others homophobia not only still exists, but is something they encounter daily, which is why this story in the Independent and accompanying video showing radio host Iain Lee walking through the streets of Luton holding hands with another man and the reaction it generated over the course of a ten minute spell was as important as it was depressing. It’s sad that, in 2015, I would have to stop and think before showing any kind of affection a man I loved in public. That’s plain wrong.

What’s just as interesting, however, is the reaction to the video I’ve seen from some other gay men. The line appears to be that we all know homophobia is an issue and we don’t need the press to remind us. Furthermore, who are two heterosexuals to tell us that homophobia exists? What right do they have to walk in our shoes?

In my view, they’re exactly the people that should be looking into it. Straight people need to experience the intolerance some gay men or women in the UK encounter in their home towns, because – like me – millions of fair-minded and sane heterosexuals across the UK probably assume homophobia is a thing of the past. We need to remind them that it isn’t. They need to see, first hand, that it remains a problem before they can act on it, and I’m not going to criticise anyone, gay or straight, for highlighting the difficulties a gay man or woman in Luton might face just for holding their partner’s hand.

It’s undoubtedly a good thing that I’m able to get on with my life without ever having to encounter any prejudice because of my sexuality – that’s great. It’s just as pleasing that thousands of other gay men and women can do just the same in London or Brighton, for instance, but we shouldn’t ignore the fact that there are other places in our country when this isn’t the case. A gay man in Luton shouldn’t feel like he’s got to up sticks and move to a bigger city just in order to be himself – we should be working to ensure that fear doesn’t determine where he chooses to settle down. 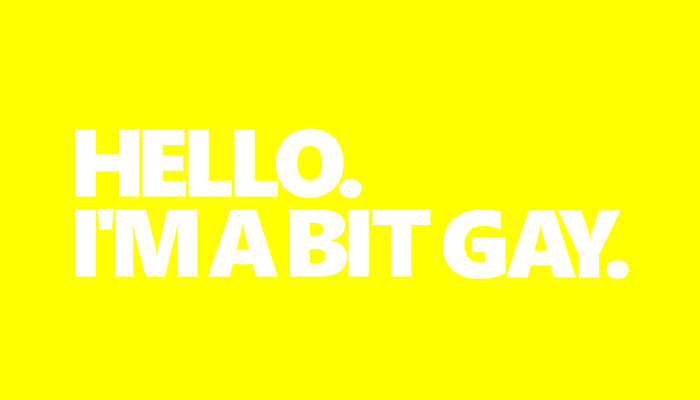 It’s almost as if some gay folk don’t want to make too much noise. It’s like they think if we cause too much of a ruckus or draw too much attention to ourselves, the heteros of the world will lose all patience with us and decide that maybe they’re not as okay with the ‘whole gay thing’ as they thought.

So, lets keep banging this drum – not in order to remind other gay people that, in some parts of the country, life is shit, but rather to cast a light on the issue for all the straight people we know. They’re, ultimately, the people who are going to force the change, and they’re the ones that need to see this video and hear our stories.

What’s more, we need to take confidence in the fact that highlighting prejudice in any form should bever be something we’re ashamed of. Refusing to be sorry for our sexuality includes dispelling the idea of being scared to talk about any issues we face. It’s time to make some noise.