It’s a special game that can make you play on when all your senses are urging them to stop. Until tackling The Last of Us, just two titles this generation had enabled me to overcome such an inclination: BioShock and Alan Wake.

Both games, for different reasons, shook me to the core at times. In the case of my trip to Rapture, the apparent enormity of some of the encounters made even some of simpler battles seem overwhelming. With Alan Wake, is was a simple fear of the dark – or, more exactly, a fear of what threatened to lash out from deep within it.

The Last of Us, then, is in good company, and from early on sets about making your life similarly uncomfortable. Throughout Naughty Dog’s latest, there’s an underlying hope that each tussle with the game’s assortment of oddities will be your last – that your slow progress across a post apocalyptic USA will, unlikely as it sounds, be an entirely uneventful one.

So, why play on? As with Irrational Games and Remedy’s respective adventures, it’s the universe Naughty Dog has constructed layer by layer around play itself that pulls you through.

Much of The Last of Us appears designed to strip away the Hollywood gloss that big blockbusters of late have been increasingly keen to coat their violence in. Fights in The Last of Us – of which there are plenty – feel like just that: fights. Though each essentially boils down to a set pattern of button presses, there’s an intentional struggle to each and every encounter.

Given portions of play allow you to sweep through stages without taking a single life, Naughty Dog has set out to make murder – even by stealth – feel like an ordeal. There’s an undoubted sense of satisfaction associated with each death, of course, but one provoked not by glory. Rather, every body that falls at your feet is simply one more step towards your continued survival. One less person in your way.

And survival is what The Last of Us is about from beginning to end. Opening with the first hours of humanity’s downfall – an infection spreading through the population before your eyes – play jumps forward to a human race battening down the hatches as the enemy claws at the walls that serve as the last line of defense. This is no tale of the strength of the human spirit, however. Those who have survived have done so by setting against each other.

As the game guides Joel, who loses his daughter Sarah in its opening seconds, through its early cityscapes, it’s quickly established that no-one can be trusted. Every man or woman alive has blood on his or her hands, and the death of others is the only sure way of keeping yourself alive. In this way, The Last of Us rarely asks you to struggle with the moral side of what you’re doing – kill or be killed is the game’s signature, and causing the demise of others in order to save your own skin almost becomes routine.

Guts but no glory

It’s this approach that taps directly into The Last of Us’ desire to strip away the glitz and glamour that most of its rivals build their foundations upon. There’s nothing especially heroic about the game’s leads – Joel and, for the majority, 14-year-old Ellie – or the cast of combatants they encounter. ‘Smack talk’ is kept to a minimum, and there’s little sense that, win or lose, anyone is reveling in result of their actions.

In this sense, the game’s infected masses are almost a sideshow. Indeed, part of The Last of Us’ genius is to make taking on the ravenous monsters that stalk your every move entirely different to your encounters with fellow survivors.

The former, arguably, have the feel of arena-based FPS battles: you’ll find yourself sprinting away from the game’s two types of infected just as much as you will taking them on. Easiest – and, thankfully, the most prevalent – are the more human variant of the anomalies, often found crying in the darkness. This breed charge at will, but are easily flawed either with a gunshot or two, or a hand to hand tussle. Far more dangerous are the ‘clickers’ – so called because of the sound the accompanies their every move.

Entirely blind and with faces torn open by fungus that resembles a cross between Athlete’s foot and a deep sea fish, clickers are often impossible to take down in close quarters, and working out how to navigate around them – or take them down from a distance – dominates much of your playtime. 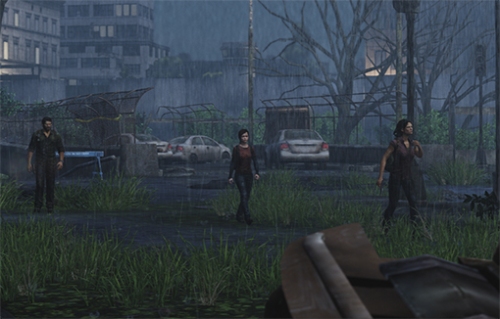 Taking on other survivors, however, is an entirely different science. Here, Naughty Dog appears to have picked up the mantle laid down by Metal Gear Solid (and, more recently, Assassin’s Creed), with stealth very much the order of the day. It’s a very realistic take on stealth, too – there’s no hiding from a set field of vision here, or artificially mingling with the crowd in order to evade capture. Killing your fellow humans in The Last of Us is a case of getting down on the floor, creeping from room to room and taking out your opponents one by one.

Where other games turn the act of stealth into a piece of visual poetry – slow-mo stabbings and martial arts inspired takedowns commonplace – once again The Last of Us prefers to focus on the grubbier side of snuffing out someone’s life. Even if approached unawares, victims always fight back, resulting in a panic-stricken mashing of buttons on your part as you will them away before you’re spotted by one of their comrades.

It’s an entirely adult take on combat that, sadly, is let down somewhat by the game’s comical AI.

Run for your life

What first appears to be a tactic designed to make your early encounters easy soon becomes one of The Last of Us’ few unfortunate signatures. Naughty Dog has taken a delightfully old school approach to AI when the game’s NPCs are left to their own devices – sentries following set paths as they patrol their grounds, sniffing out your scent.

Once you’ve been spotted, however, battles often edge towards the hilarious. Guards will often down tools to charge at you defenseless. Others will flee in the opposite direction, cowering in a corner, even if you’re visibly unarmed.

That’s not to say that the majority of encounters in The Last of Us are easy – quite the opposite. Where The Last of Us excels is in encouraging you to try, try, try again with instant restarts, allowing you to learn the routines of your enemies step by step, experimenting as you go. However, on notable occasions the game’s AI almost breaks down, playing out as n almost random series of events where your success or demise appears to be pot luck.

Worse still is the poor signposting that can lead to plenty of unnecessary restarts. While much of the time it’s possible to run away from your opponents, escaping rather than taking them on, there are numerous locked off areas where your progression is only guaranteed once your surroundings have been cleansed. Knowing which is which, however, is easier said than done, and it’s entirely possible you’ll uproot and leg it towards an exit only to find there’s no way out. Likewise, unsuccessfully attempting to take out the encroaching masses when, actually, play wants you to run for your life is an equally common occurrence.

Both faults are signs that, when stripped back to its bones, The Last of Us is capable of making plenty of mistakes as it treads what’s a well-trodden path. Indeed, a big part of the game’s appeal is that so much feels familiar. The Last of Us’ lengthy tutorial doesn’t stop sharp, but rather fades into the background, with Naughty Dog almost reminding you of what’s expected in a videogame rather than teaching you from scratch.

There’s an accepted language throughout, both in terms of the action and the plot. Yes, most of the game’s twists and turns are actually heavily hinted at minutes before – their reveal less an intention to shock the player, and more a move to indulge in their depression and confirm their worst fears.

It’s surprising, then, that – writing this weeks after The Last of Us hit the shelves – there’s been such a mixed reaction to the game’s conclusion. Without laying out the plot on these pages, every decision made by Joel in The Last of Us (interestingly none of which, it should be noted, are in your hands) is motivated by the pain he still feels for the loss of his daughter.

The game’s narrative constantly drops hints that lead Joel is no hero. Death and despicable acts have been as much a part of his life as they have every other character and, while it would be wrong to suggest he’s in any way a bad person, he’s as susceptible to the sense of selfishness that would grip any other human when placed in similar circumstances.

To be disappointed with The Last of Us’ closing moments, then, is to misunderstand its message: the almost certainty that, when faced with destruction, people are wired to think of their own immediate security and that of those they love, rather than the fate of the human race. It’s about as anti-Hollywood as it gets, which is why – personal demons aside – it’s disappointing that Joel himself is undoubtedly the least interesting character in the game’s universe.

To a certain extent he’s designed to take the form of an empty vessel to allow players to feel comfortable in his shoes, but the fact that Naughty Dog has chosen to make him physically look  generic with a capital G – chiseled jaw, buff man beard and the kind of body that would breed the envy of regular gym goers – feels like something of a misstep. Presumably Joel lifts the bodies of the fallen in his hours away from the screen in order to maintain his ridiculously healthy physique.

That’s all trimming, however. Undoubtedly the world Joel and Ellie inhabit is one that’s been constructed with much experience. Almost perfectly paced, The Last of Us’ final few hours are exactly what they should be – a crescendo. 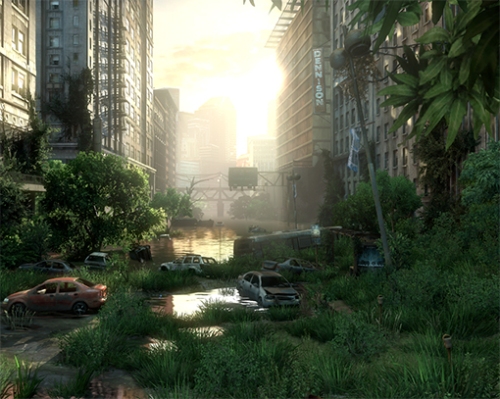 Everything you learn along the way – every encounter you successfully navigate through – feels like training for the game’s penultimate act, set amongst some gloriously snowy hills. Here, The Last of Us steps things up a notch, sets off all its fireworks at once and really puts the game’s ideology – sneak and destroy – through its paces.

It’s hard to imagine all too many games in the opening years of the next generation coming close to matching Naughty Dog’s PS3 sign-off in terms of delivery. Here’s a game that sets out to push an inconvenient message and doesn’t stray from its design once. What’s more, it’s been a huge commercial success with it.

Some commentators may have got wrapped up in applauding the sheer professionalism that shines out of almost every element of play. However, it’s ultimately the game’s familiarity – Naughty Dog’s move to both mirror and better elements aplenty from releases gone before – that ensures that, when it comes to choosing a game that best illustrates the high points of a generation, The Last of Us is first choice.

3 thoughts on “From last to first: The Last of Us, a review”